Blasting through the Dales last night was exhilarating.  The sky was a clear azure blue and the fields a lush green, the boundary walls clearing marking the landscape with their cool limestone.  When weather is this good it makes me think there will be days and days and days like these and of the early promise of summer.

Turning the corner into Kettlewell we stumbled across this gem: the Bluebell Inn and thought to flag it up for anyone looking for a real food (Paleo) friendly menu and a great evening.

The menu was simple with a specials board: all home cooked, prices ranging from £5 upwards for a starter and between £10.95 and about £17 for a main.  We chose to share a starter: goat’s cheese with a delicate salad and a raspberry vinaigrette dressing.  The plate was dressed well, simple and colourful and the goat’s cheese was local, warmed, soft and melted, sharpened by a lick of the vinaigrette dressing.

Service was prompt, friendly and attentive but not intrusive.  We chose two main meals: chicken stuffed with chorizo sausage and wrapped in bacon and pork medallions with a honey and ginger sauce.  Both dishes were served with side dishes of thick roast potatoes new potatoes (neither of which are particularly beneficial and so we chose not to eat) however a vegetable selection was also on offer.  It is worth pausing here to say that upon delivery up of the veg we were urged to eat as much as we liked and to order more if required.  And we did! The vegetables were a soft orangey-coloured mashed swede, carrots, green leeks and bright purple cabbage: fresh cooked and you could tell this because the colours were so vibrant in the dish, made by someone who cared about the food they were serving.  The plates had been warmed, the meat was piping hot and stayed that way throughout the meal which meant every mouthful was warm and sustaining and complimented by the vegetables.  The flavoursome sauce of the pork was subtle with just a hint of ginger and honey. The chorizo and bacon was enough to compliment the chicken which was cooked through and served in a (no sugar we checked) tomato and onion sauce. 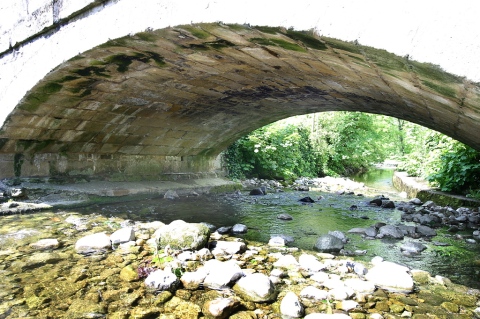 After the meal we wandered down to look at the stream that meanders through this popular holiday village.  Mike gave me his coat but  the sun was setting low in the sky and a chill was beginning to form in the night air.  We pulled the roof back on the car and drove off, pausing only once to let a gritter pass as we turned the corner for home.  This early Sunday morning the sun is up and bright again, it’s clear and cold (-3) but I think it;s going to a good one.

Do you know any paleo friendly eating places?  Tell us!  We’d love to hear from you and will make space to publish all submitted information so it’s available to all.

This has to be the most widely promoted well known public health campaign in the country.  And given that fact, you might be forgiven for thinking the advice was based on medical evidence and scientific fact?

Well, you’d be wrong!  Because there is no scientific evidence.  In fact, this campaign was invented in California in 1991 by the American National Cancer Institute and the Produce for Better Health Foundation who’s members comprise vegetable growers, packers and the logistics world of …..that’s right, fruit and veg growing and fruit and veg packing. Yes the very organisations that have the most to gain (financially) by convincing the world to eat more fruit and veg.

So what’s the theory?  Fruit and veg are recommended (in conventional dietary wisdom) to prevent heart disease and cancer because of their antioxidant properties: they are supposed to prevent the creation of damaging free radicals.  Interesting but is it this true?  The most recent study was published in April 2010 in the Journal of the National Cancer Institute.  The study involved 142,605 men and 335,873 women  for the period 1992 – 2000.  The review found that eating five portions of fruit and vegetables a day had little effect on cancer risk and concluded that the very small difference observed could be attributable to other factors: giving up alcohol or smoking, obesity, exercise, taking the Pill or HRT.

There are a remarkable number of other studies which also fail to support the claims made.  For example, in 2002 the University of Helsinki studied the effects of high and low intakes of vegetables and berries and apples on oxidation in subjects consuming diets high in unsaturated fatty acids.  They found “no significant differences between the diets”

In 2003 THE CARDIO 2000  study results were published.  The study was looking at fruit and vegetable consumption in relation to heart disease.  The study found in favour of fruit and vegetable consumption and concluded that it could reduce the risk of heart disease but signficantly it did not need five portions a day to achieve this. “Consumption of two or more servings a week is associated with a 70% reduction in relative risk” the researchers concluded.  And yes, you read that right,“two or more servings a week”.

In fact,  Professor Sir Charles George (medical director of the British Heart Foundation) said during an interview with the Daily Mail about the study results and the obvious conflict with government guidelines that “there is some argument about how much you need.  I think five may be an arbitrary figure.”

So what’s the problem  and why are Paleo Works flagging this up?

Simply this: what we have is a marketing campaign with no provable significant benefit for public health.  The campaign is based on neither medical evidence nor scientific fact.

Worse still this campaign is fuelling the obesity epidemic.  Why?  Because of the high levels of fructose contained in fruit and the effect it has on our bodies (not to mention teeth – if parents knew the damaging effect fruit juice had on their children, the likes of Tropicana and Sunny Delight would be out of business by tomorrow).  Take a look at this article we wrote on the damaging effects of fructose.  In summary we state that the high sugar content of many fruits means that they are not something to emphasise in your diet if weight loss and optimal health are your goals.  This is particularly so if you do not tolerate carbohydrate well (specifically: diabetics, type 2 diabetics, those who suffer from metabolic syndrome or are insulin resistant).

If you are going to eat fruit, eat it sparingly and opt for berries which are relatively low in sugar and offer a better deal in terms of nutrient content.  Avocados are also a good choice given the high good fat content.  Every day fruit: apples; peaches; pears; plums; citrus fruits – eat these in moderation and by that we mean watch your body and how it reacts.  High sugar tropical fruits (pineapples, mangoes, paw-paws, passion fruit) : these should be avoided until you hit your weight loss targets  And don’t eat dried fruit, period!

Vegetables are a great choice on the paleo diet especially those that grow above the ground such as broccoli, cabbage, cauliflower and kale.  These tend to be low in carbohydrate and highly nutritious containing folate, vitamin C, phytochemicals and soluble fibre.  If you are looking to increase calcium in your diet choose:  collard greens, spinach or turnip greens.  Vegetables that grow below the ground are richer in carbohydrate content and should be eaten less frequently: carrots, parsnips, swedes, sweet potatoes, squashes, pumpkins.  Avoid white potatoes for their effect on your insulin.   Great alternatives to mashed potato are mashed cauliflower or mashed  celeriac (mash with cream or butter or both, add seasoning) Onions are fine (impossible to overeat onions) and mushrooms are relatively low in carbohydrate and rich in vitamin D and tasty (especially in a fried breakfast)!

In summary – avoid fruit in favour of vegetables if weight loss and great health are your goals.  And be selective int he vegetables you chose.  Follow the paleo diet and in this way, your weight will continue to fall off.  Finally avoid those public health campaign messages….or at least investigate for yourself and check that the findings are based on scientific evidence and not fuelled by an industry with a vested financial interest! So the very next time you hear a food manufacturer or distributor telling you it’s part of your five-a-day, you’ll be saying No Way!